Christopher Nolan, who celebrates his 50th birthday today, has not known failure in his career that spans more than two decades. Here are this top 5 films.

A three-judge panel of the 9th U.S. Circuit Court of Appeals found that Ashley Judd should be allowed to pursue both parts of her lawsuit against Harvey Weinstein.

Matthew McConaughey said about the book, titled Greenlights, "This is not a traditional memoir, or an advice book, but rather a playbook based on adventures in my life." The book will release on October 20.

The new deal covers Universal films — which include the Fast and Furious franchise, Jurassic Park movies and the Despicable Me series — in the US over the next three years.

Tenet to open internationally first, in US a week later

Warner Bros. on Monday said Tenet will arrive in more than 70 countries on August 26.

Attorney Sasha Wass was summing up at Johnny Depp’s libel case over an article alleging he physically abused ex-wife Amber Heard — a high-stakes celebrity trial in which the reputations of both former spouses are at stake.

Ryan Reynolds announced the reward in response to a news story shared by CBC TV about Mara Soriano, whose black backpack, containing the stuffed bear along with important documents, an iPad, and a Nintendo Switch, was stolen recently.

Zack Snyder was directing Justice League before he had to drop out of the project due to a family tragedy during post-production. After he left, Joss Whedon, who was already attached as one of the screenwriters, took over and finished the film.

Ray Fisher on Joss Whedon: We’re gonna get to heart of everything

Earlier this month, Ray Fisher had claimed in a tweet that Joss Whedon was "abusive" and "unprofessional" on the sets of their 2017 DC movie Justice League.

John Saxon, known for Enter the Dragon, Nightmare on Elm Street, passes away

John Saxon, died on Saturday due to pneumonia in his Murfreesboro home in Tennessee, his wife, actor Gloria Martel confirmed in a statement.

Ryan Dorsey, who was married to Rivera, 33, for four years from 2014 to 2018, posted a heartbreaking tribute on Instagram on Saturday.

Rapper Kanye West has offered an apology to Kim Kardashian for sharing private matters during a campaign rally and on social media sites.

George Clooney will also produce the feature film adaptation of J R Moehringer's The Tender Bar: A Memoir along with his producing partner Grant Heslov through their Smokehouse Pictures banner.

Johnny Depp, 57, is suing News Group Newspapers, the publisher of The Sun, and the newspaper’s executive editor, Dan Wootton, over an April 2018 article that labeled the actor a “wife beater.” Depp has told the court that he was the one abused by his ex-wife Amber Heard.

Hollywood Rewind | The Lord of the Rings I: A classic example of ‘how to make good movies based on books’

At a time when everything seems so uncertain, it is reassuring to fall back on the basic, decent tenets of humanity which The Lord of the Rings: The Fellowship of the Ring espouses.

Mel Gibson, 64, as completely recovered and is doing “great” according to his representative. He also said Gibson has tested negative “numerous times” since then.

Hollywood has now gone more than four months without a major theatrical release. While some films have found new streaming homes, the biggest upcoming ones — Tenet, Mulan, A Quiet Place Part II — remain idled like jumbo jets on the tarmac.

All the trailers released during Comic-Con@Home

The San Diego Comic-Con is being held virtually this year. So far, there have been a few trailer and teaser releases from Lovecraft Country, The New Mutants, Bill and Ted Face the Music, His Dark Materials Season 2, among others.

Mulan, A Quiet Place 2, Top Gun Maverick, Spider-Man 3, Avatar sequels, Star Wars sequels and many other films have changed their release dates yet again due to the ongoing coronavirus pandemic.

Amber Heard testified that everything she had said at the High Court in London was true and that she just “wanted to be left alone” after the breakup of her and Johnny Depp’s tempestuous marriage.

If you didn't know already, there is more to Hollywood star Daniel Radcliffe than just playing Harry Potter in the successful adaptations of the bestselling series. Discover him anew through these five films. 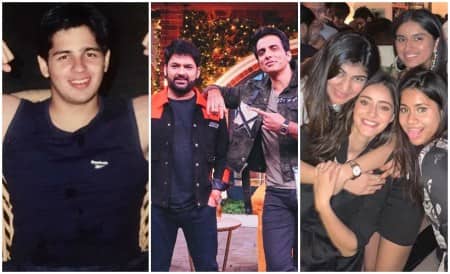